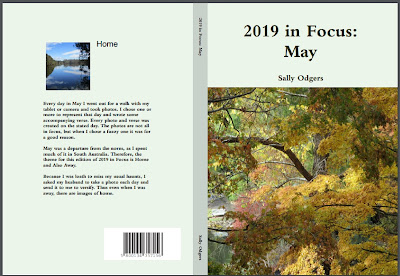 Every day in May I went out for a walk with my tablet or camera and took photos. I chose one or more to represent that day and wrote some accompanying verse. Every photo and verse was created on the stated day. The photos are not all in focus, but when I chose a fuzzy one it was for a good reason.

May was a departure from the norm, as I spent much of it in South Australia. Therefore, the theme for this edition of 2019 in Focus is Home and Also Away.

Because I was loath to miss my usual haunts, I asked my husband to take a photo each day and send it to me to versify. Thus even when I was away, there are images of home.

After March’s excesses, I promised a slimmer vol in April. May though… hmm.

So, here is the cover of the fifth book in my self-indulgent series...

And here are the five covers so far.