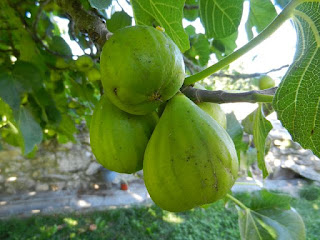 Source? Kris brought it from over there
Significance? It gave him a piece of home, and serves to hint at a side of his nature he didn’t often display
Fate? It still grows on the balcony at Over Here B&B
Author’s inspiration? I’d been eating figs!
First appearance? Calico Calypso (2018)

It even had a garden bed in a tiny enclosed balcony where he grew a fay fig tree as a portable piece of home.

In the mid 1980s, Kris Peckerdale lived at least some of the time in a tiny room on a top floor of Over Here B&B, the bed and breakfast establishment run by his family. His younger sister LeeLee and her husband Mal were the managers, but Kris and his brother Alex helped out. Since Alex’s lover lived Over There in the fay homeland and never came to the B&B, Alex spent much of his time away, so Kris took up most of the slack. He was single, and his part time job at a gallery and his work as an artist gave him flexible hours.
Most pixie men, and certainly all the ones in Kris’ extended family, were passionate and open to experience. Kris wasn’t sure what had happened to him, but at thirty he saw himself growing old before he should. The fig tree he grew on his balcony wasn’t a companion, but it gave him something to tend, and it reciprocated with fruit. When a delightfully self-possessed calico cat followed him home, Kris took it to his room to spend the night before he returned it to its owner. He showed it the mulch around the fig tree as a place to scratch if necessary.

Still holding the cat in his arms, Kris moved out to the balcony. “That’s where you can squat if you feel the need,” he said, indicating the mulch around the fig. He reached out, picked a ripe fruit and bit into the blunt end. The calico tilted her head back and gazed at him, then lifted an imperative paw to touch the fig.
“Not for you, mistress. Probably upset your digestion. You can have some fish.”
He finished the fig and bent to set the cat’s food on the floor. As he reached down the cat performed a graceful slither and somehow ended up draped around his neck.

Kris was fond of cats, so he indulged this one in its desire to act as a shawl.
Later, it decided to sleep on his bed. Kris woke up to a considerable surprise; the calico queen had shifted to her other self, a leprechaun colleen named Calypso Lindon. Calypso was a young woman of few words but decided opinions, and she’d decided Kris was an interesting proposition. As a mutable fay, she could manifest as either a tall redhead who worked as an exotic dancer, or as the calico queen. Unlike most muties, Calypso spent more time as a cat.
In the morning, she announced she was hungry.

Kris glanced at the cat food. So did Calypso. They looked at one another and laughed.
Kris walked to his balcony and picked two ripe figs, as big as pears and twice as juicy. He sat on the bed to eat his. Calypso bit the end off hers and sucked luxuriously at the pink flesh. She caught Kris’ fascinated gaze, licked her lips and said, “What?”

Calypso, having made up her mind, gave it to him straight.

“I dance at the club four nights a week. The rest of the time is for you.”
He thought about all that togetherness and wondered whether he was pleased or appalled. “But where have you been living?”
“At the club, mostly. Made a nice nest in the wardrobe.”
“So you—”
“I do spend a deal of time in my calico form. Most of it, maybe. Will that be a problem for you?”
He was pleased then. Not appalled. Togetherness would be wonderful and not filled with unnecessary chatter. “It’s no problem at all.”

Kris and Calypso enjoyed more than a fondness for figs, and found they complemented one another perfectly. The fig tree went on growing but it had one more surprising effect that manifested more than three decades later when Skye Bakewell, a middle-aged halfling living mostly over here, accepted a fay man’s help to get quickly where she wanted to go over there. His name was Corin Peckerdale, and he embodied the best qualities of both his parents.

“Figs!” Skye said.
“I beg your pardon?”
“Your scent. It’s ripe figs.”
“Says the lady who smells like air-dried washing!”
“At least people don’t try to eat me.”
“No, they just think of bedding you in a billow of sheets…oooh…all right, lovie, pax.”
“Figs. I suppose it figures.”
“You can blame my revered parents for that. Dad has a fay fig tree and he and Mama enjoy them rather a lot.”
“At least they’ll stay regular,” Skye said.
Corin laughed and squeezed her hand. “Oh, they are very regular.

It’s not clear whether Corin is referring to the fig tree at the B&B or to the one at Peckerdale Grene where his mother likes to sun herself in her calico form, but fay trees being what they are, it’s likely one is the ancestor of the other.