Source? It was a twenty-first birthday present from his dad
Significance? It was useful, beautiful and romantic and so was bound to appeal to Si
Fate? Si undoubtedly still has it. His grandchildren Ashby and Harry get to play with it as a special treat
Author’s inspiration? It seemed the right thing to take on a solo bushwalk in the 1980s
Appeared in? The Wish Match (2017)

Left. Si consulted his brain and then his antique brass compass, a twenty-first birthday present from his dad. Left was north from where he sat.

Not long after his twenty-first birthday, Si planned a camping trip with his flatmate Tom and Tom’s girlfriend Mish. Unusually for him, he was out of sorts. His pre-med course didn’t please him, and he was feeling lonely. His old confidence in himself was uncomfortable as he felt that what was appropriate behaviour for a teenager was scarcely so for an adult. Tom and Mish dropped out of the trip, but Si decided to go alone. Maybe he could sort himself out.

He wanted to get right away and think about his future.
Thus, here he was, pitching camp in the middle of nowhere. Happy as Larry, as the saying went, except there was no one to talk to.
Si took off his boots and crawled into the tent. He spread out his map, consulted his compass, and bit into a muesli bar. It tasted odd, so he looked at the label. Even with his training, he was unable to identify some of the ingredients.
“Not the best idea, sticking strings of chemical symbols in these things,” he remarked.
Silence.
Of course. There was no one to hear him and no one to reply.

Si knew where he was, but not where he was going. Alone in the bush with his tent and his compass he made a wish…

Si crawled out of his tent. He’d always had a good sense of direction, and he knew the path he intended to walk. He started a small, safe fire and boiled up water for tea. It was a beautiful dew-soaked morning, and he turned to his left, drawing breath to mention the fact.
There was no one there. 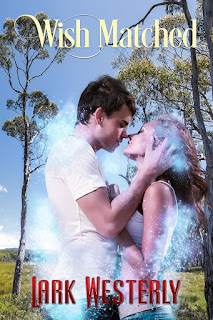 Left. Si consulted his brain and then his antique brass compass, a twenty-first birthday present from his dad. Left was north from where he sat. He’d planned to go south, but he had a powerful urge to change his route. It almost amounted to a compulsion.
Excitement caught him. She was out there. She was coming from the north. He’d go to meet her.

Of course she was, and of course he did. As he said when he met her…

“And I’ve been heading towards you ever since I wished. I had a compass.”

As it happened, Si’s wish match had a compass as well, but hers was in her head.

Si and his antique compass appear in Wish Matched. His latest appearance to date is in Man Overboard. Si was over fifty by then. He and Tom were still friends, and they decided they might finally go on that camping trip!